When There Isn't Any

A fragmented text written in response to the exhibition Besides at Five Years Gallery.

When one is left without an object or subject that can manipulate words, only plausible apparitions are there to manipulate thoughts. The existence of the following objects is just an uncertain - maybe philosophical - hypothesis. This is the territory in which to dissect apparitions; these words come before the objects . As the poet Octavio Paz once said, ‘apparitions are manifest, their bodies weigh less than light, lasting as long as this phrase lasts’.

In the flow of options and obstructions to representation, the feeling of an image comes into view. This essay begins dissecting something ‘adaptable’.

An object may appear in the space, whose limits and extension are visible and yet varied. It stretches outwards and inwards along this fictitious wall as arms when running after an embrace. Whenever I seize on a separate section of this subject, it slips away. Is a text on an invented exhibit less authentic than a reading group on Contemporary Art Magazines? Before and behind an object, there is thought. Antonin Artaud offered existence to his uncertain ideas out of the respect for the feeling that dictated them and the images and phrases he was able to find. One can preserve a priori impressions by arranging their subjectivity into objects, which are adjusted to be liable to be found somewhere. I find words to adjust an absence. I precede images with phrases that are not shadowed by figurative premises. This text is authentic in the only possible connotation of the word: it is true to itself.

In the flow of options and obstructions to representation, the feeling of an image comes into view. It is ‘Frozen Strawberry Spray Paint’.

Objects are made of materials and measures that define their essence; this guarantees comprehension and use. Yet in the process that produces this finished subject, some of its ingredients are made into fragments, which are dismissed to be then swept away. The history of an object is told through the qualities that are left after selection and sanding down. Frozen Strawberry Spray Paint allows a reflection of sorts. When paint is sprayed on a surface, this fading lollipop-like colour is formed by those tiny drops which realize the desired result. The rest of this shading action, the process of generating diverse shades of light, evaporates. Of the drops that existed and caused properties of colour, the subject contains only those who were lucky enough to mark their presence. Someone said: ‘of all your children, only those who were born’. However, what had no impression on the subject still sits in the space, floating around it. ‘Nothing is lost, nothing is created, everything is transformed’, the French chemist Antoine-Laurent de Lavoisier proved in 1774. This essay is a remnant of what it can be.

In the flow of options and obstructions to representation, the feeling of an image comes into view. In this case it’s video. 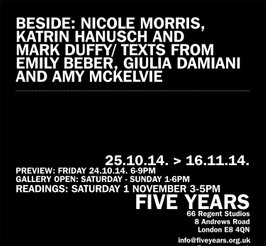