I was commissioned to respond to artist Daniel Peltz's long term project Performing Labour at Rejmyre’s glass factory in Sweden during his exhibition at the Norrköpings Museum of Art in 2017. My curatorial response as product is a reflection on Peltz's work as well as on the gesture of curating. It is a product of and about my labour as curator. It includes a Curatorial Poem. Please find below an extract from the Curatorial Statements, which can be read alongside the images of Peltz's work. Find more documentation of his practice on his website at ~www.danielpeltz.net~

Starting from zero looking for an icebreaker: curatorial statements of over-identification.

To construct my curatorial work I have decided to try to break the exhibition. What is gathered below are shuttered statements awaiting to be collated together.

I prevent a particular experience of the work. I write what the object Any Thing is not about in the now.

The Any Thing speaks and not about uncertainty. It is not an object that can be replaced by other elements in this story. It is not of common origin, of any individual’s fabrication, as much as it is not specific to one language or one view. It wasn’t thought in the Swedish language perhaps and yet it wasn’t conceived anywhere else but in its placement here. It couldn’t be predicted in the past but it won’t be lost in its relation with the future. In more than one sense, its sound cannot be contained. It might not sit well on a mantlepiece, in the warmth of a secluded space away from the surrounding forest, from its darkness. The Any Thing is not a purely conceptual formulation to be consumed and discarded. It is not made to break. Its weight is neither light or heavy.

I ask the visitor to imagine being with the objects of the live feed. The visitor is imagined displayed in a case or gallery through a camera.

You are your comfortable self, you exist alongside few other individuals that have the same degree of agency as yourself. You are not alone. Your temporality, your being in the space, occurs while you are being shown. You are the presence of the present. You are two. In the projected image, in its appearance, a relation is created between the anticipation of a coming moment and the remembrance of the past. By watching you, I get a sense of the incongruity of time. In the gallery the floor is cold and inhospitable. The temperature of the case preserves the established links between the different subjects. This is an invitation to move and imagine how to break them.

Seeking an ‘Any Thing’ from an uncertain time in the ruins of Rejmyre’s future, Lake Hunn excavation February 26, 2017, courtesy of artist Daniel Peltz 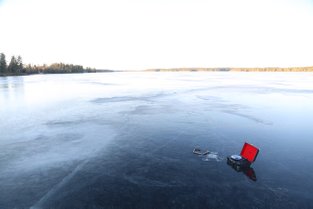 At last leave the gallery, leave this archive. This curatorial product runs into the Retail Shop.

Leave the Product Catalogue, leave the breathing break blowers from the factory behind. Forget the objects forming the material substrate of this exhibition. Think virtual. Think of how to store your different sensations around each object. Think of how to make them future. Be aware of the gap between a fleeting experience and your experience in this space. Make the gap larger. Have your own take on the labour of your visit. Write down a question about it. Enter the Retail Shop. See the products on the line. Exit. Take me with you.

The curatorial product seeks to undo the refuge sought in language. In undoing this it seeks the company of the Elephant Refuge.

Thinking a correspondence between the refuge in Rejmyre for a group of unemployed elephants from Burma and language. In language refuge, protection against danger today is mostly given by clean, general sentences. Sentences that can be effortlessly understood by a multitude of people. Clichés which reduce to a minimum the time of translation (consider for example the phrase “time will tell”). At the other end of this language-spectrum lies the potential of language to be special communication. Aristotle called these sentence “special places”. They are metaphors, meanings that are intrinsic to a specific situation. They offer a kind of reassurance in disorientation. The elephants in Rejmyre can be expressed through the latter condition of language. They are this special communication. Their refuge will be constructed through bricks made from the dangerous waste. The structure will offer a springboard for imagination. Only time will tell.

A list of the elements I am afraid would get lost and would like to emphasise in the exhibition space. Especially the sounds: the voice of forest, the voice of the lake.

In both videos, the Linbana Recovery and Seeking an Any Thing from an uncertain time in the ruins of Rejmyre’s future, focus on the impact of bodies on the water. In the first one: the boots sloshing on the melted ice on top of the lake, the footsteps becoming your rhythm. Remember the time the linbana jumped off its rail and fell in the lake. Remember its splash generating this whole history. In the second video: the sound of the bubbles underwater, the pressure created by your own movements. Then look at the forest, if you can look at it from the Norrköpings Museum. Consider the sound of branches dropping in the wind. The crackling of wood burning in a furnace nearby.